Bill completing another end to end 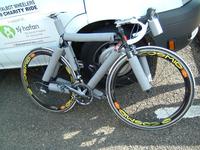 The last day of the tour, and an earlier start than usual, leaving the lodge at half eight. The same couple that had said good night to us the previous night were saying good morning to us at 7am, and serving the best fried breakfast you can get. They rewarded our ongoing mission to JoG with a bottle of Balblair whisky. They obviously know the way straight to our hearts.

To begin with the route seemed very straightforward as we crossed the causeway/bridge/whatever it is across the Dornoch Firth and met nothing but gentle gradients until Helmsdale. There it was suddenly obvious that the traffic ahead was travelling on a road that snaked up and over a sizeable promontory. Sizeable barely describes the effort it took to get up it, or the number of midge bites Dai Smith received all of a sudden when we stopped at the top, but more was to come. In Berriedale successive signs said 13% descent (burn out your brake blocks time) followed by 13% ascent (burn out your quads time).

Getting to the top of that and with over 40 miles on the clock I realised I was getting low on energy. Fortunately lunch arrived just in time at a café in Dunbeath, run by three women who seemed highly pleased to have 14 hearty men in their midst. Amidst toasties and sarnies, and the best Scotch Broth of the week, a giant teapot came out to do the rounds without even bothering to count the refills. Under the counter were boxes of sweets I thought had gone out of production years ago, and the whole place had the feel of a tuck shop about it. Next door was a small museum dedicated to crofting, so all in all an excellent find. Thank you ladies.

Fortunately by now the worst of the hills were over, and the road signs were starting to run out of places to list. Wick was our last notable conurbation, and then we were finally down to the last 12 miles. Things stayed relatively calm to begin with, but inevitably the blue touch paper was lit, a bit, as people worked out very carefully how much they were prepared to sprint after 870 miles. Not much was the general conclusion, and the John O'Groats sign finally hove into view without much fanfare. It was a beautiful day in the saddle, the best weather by far, and absolutely idyllic in places, waves lapping on the beaches and eagles screeching overhead. But it's just the end of a journey which will live in the memory, and hopefully do some good for the children of T? Hafan.

If anybody reading this page would like to contribute to this worthy cause, please do so on our Just Giving page. Thank you.